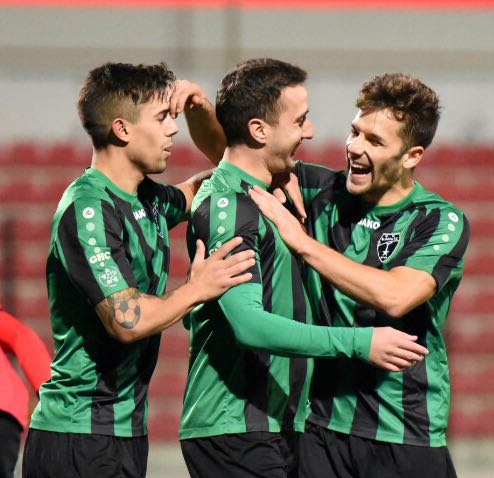 It might have been coldest evening of this winter so far, but that did not stop League Champions Europa continuing in the same red hot form they had been in for the last few games.

It all started with Toni Garcia Montero – playing in the left-wing position – getting our first serious chance of the game, with his rasping shot just deflected over the bar. A number of minor chances followed – mainly for the Greens – with the best of them just rolling the wrong side of the post after a free-kick from the very edge of the Mons Calpe box.

At half-time we could say we had had the better of the goalmouth action even if the opposition held their own. A Polish TV station were on hand to interview Europa’s Peter Cabezutto and some of the players as one of the champions of smaller European footballing nations.

As if inspired, Kike managed to push the ball over the line only minutes after the restart, spurring the Greens onwards to almost double the score on the 15th minute when our 23-year-old struck the post.

What followed was a prolonged period of pressure from Mons Calpe at the end of which Kike scored his second midway through the second half after a delightful one-two with Alex Quillo. He almost got his hattrick too, after rounding the last defender and shooting narrowly wide across goal.

Finally it was Sykes Garro who scored our third, being in the right place at the right time to knock in his first of the season, a real boost for the Gibraltarian striker.