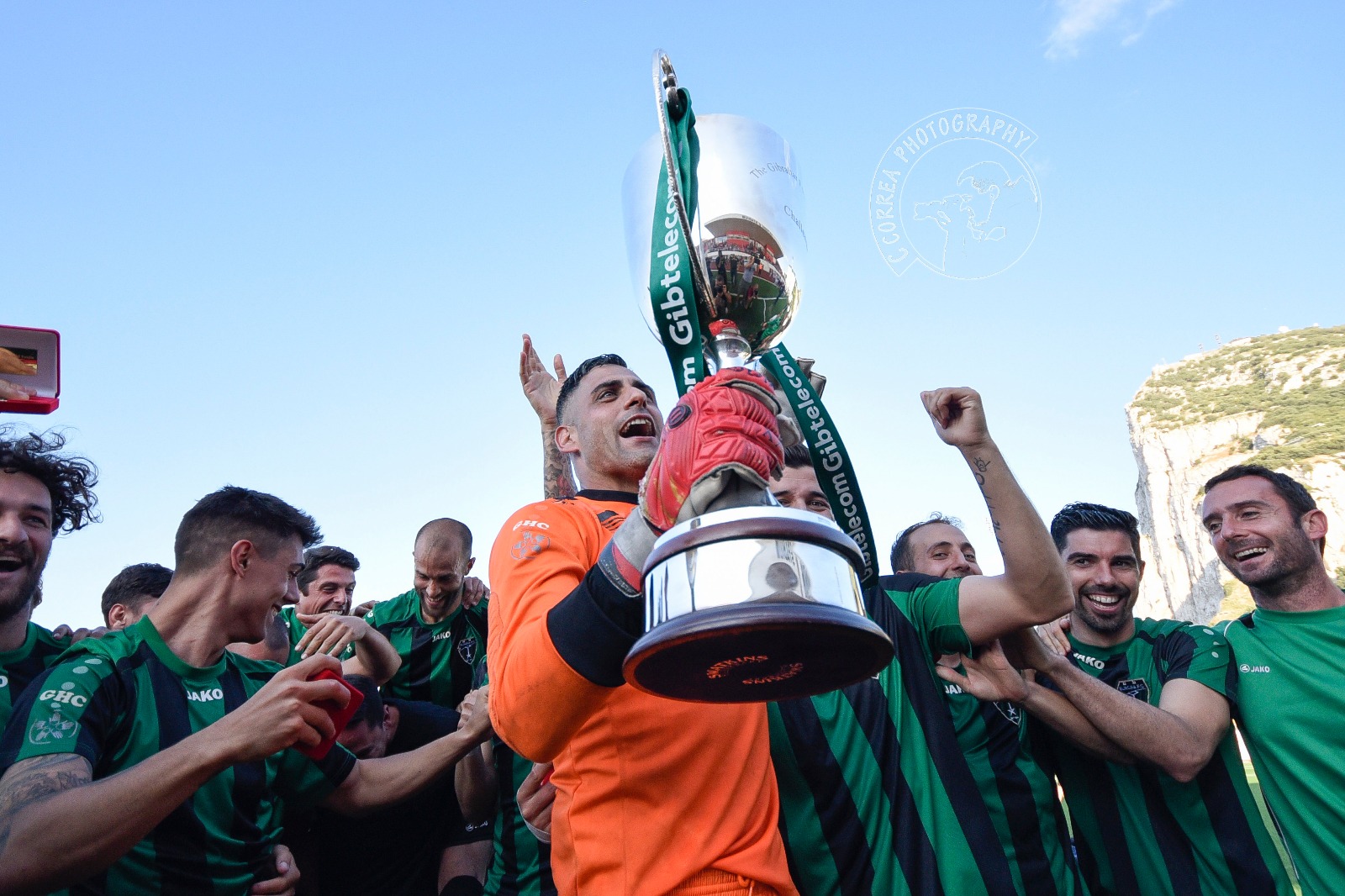 A good crowd on a beautiful sunny day saw Europa take on Mons Calpe in the Gibtelecom Rock Cup Final. It was no surprise that experienced striker, Kique – who has come back to form since the return of Juanjo Gallardo to the hotseat – got the first goal for Europa, spinning past his marker and delightfully chipping the goalkeeper from distance. The opener came in the sixth minute, making what was already a tough task for Europa’s opposition, an even harder hill to climb. But to their credit, rather than fall on their faces and leave the back-door open, Mons responded in style by upping the tempo even more. While this resulted in a fair amount of bookings it also presented them some chances, with Rubo Blanco’s attempted overhead kick drawing a few giggles from the crowd after Bale’s cracker in the UCL final the night before. In terms of more real chances they were few and far between as Europa sat back and let Mons Calpe take a stronger grip on the game. A free-kick for either side is all they could muster, with both Alex Quillo and Facu Cascio seeing their efforts unable to change the scoreline. Surprisingly, the second half started with a goal and it wasn’t to the Rock Cup holders. Blanco turned provider, running down the right before passing the ball into the area where the Europa defence had fallen asleep and Juan Pablo poked the ball past Javi Muñoz. This made the Green Machine push up a gear, and Ibrahim Ayew got the first chance to restore the lead when his dribble past two players set up Mikey Yome who missed the target. The youngster did well coming into the starting eleven after his goal against Phoenix earlier that week and is everyday feeling more comfortable in the Europa set-up.

Finally, it was the sending-off of Manuel Onega that spelt the beginning of the end for Mons Calpe’s challenge. After his departure it was mostly one-way traffic apart from the odd fruitless counter-attack and in the 75th minute Kique made it two on the night for the Greens. It was created by Ibrahim Ayew, who recycled an attack back to Mustapha Yahaya. The Ghanaian then delivered the perfect through-ball for Kique to squeeze the ball just past Grasso into the Mons Calpe goal to the delight of our fans. Alex Quillo and Enrique Carreño had chances to increase the lead, the latter having a goal disallowed for offside almost a full minute after it was scored. Mons Calpe, to their credit, kept on fighting, although at one point illegally – as deemed by the referee – so Andre Dos Santos got his marching orders to leave our opposition down to nine men. In the end Europa held on until the end, celebrating a second consecutive Rock Cup which put us directly into the Europa League as a seeded club. Scenes of joy continued into the night as our players celebrated another victory for the club which is now consolidated as being in the top two of the country.