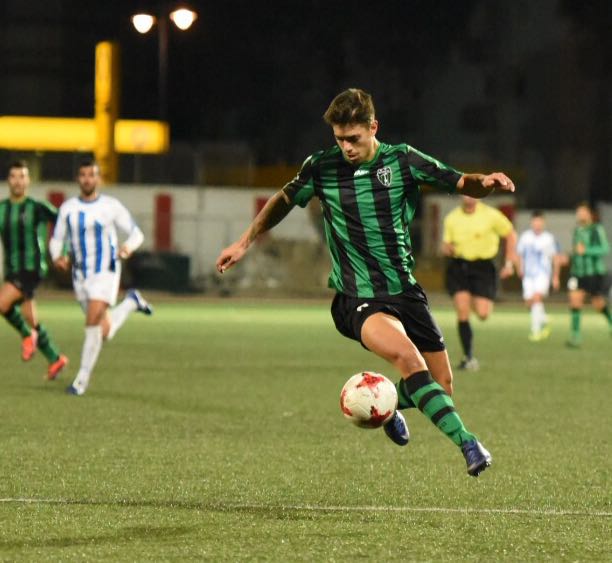 In what was a must win game for Europa to end the rot, we kicked off with that same vigour that saw us win the league and cup double last season. But St Joseph’s also had a point to prove, flying high in third position and aiming to cement an early season lead. These circumstances led to a stiff midfield contest in the early minutes, as the nerves settled and the players on both sides staked their claims.
The first real chance fell to St Joseph’s, with a free-kick near the corner flag being halted by the defence and the resulting follow-up being blasted over from close-range. Soon after some good movement from our boys led to a shot by our Kike which seemed like a warmup for better things to come.
Alex Quillo followed that effort up with a dipping free-kick that just flew over every player in the box, finally nestling in the arms of the St Josephs goalkeeper. The game continued to be scrappy, with fouls being conceded on both sides, although to be fair on our boys most of the intensity was around the St Josephs’ half.

A great turn by Carreño almost gave Kike an opportunity to put us into the lead but he was squeezed out by two defenders and the referee waved away penalty appeals. Next it was the Saints who took the initiative, with Boro causing havoc in our defence, finally winning a free-kick that was put narrowly wide from well outside the box. Boro was at it again soon after, getting a good contact on a well-flighted set-piece that forced Muñoz to make a very good save to push the ball over the bar.
After that our boys returned to the charge with two great chances that almost saw us make the breakthrough we so desperately wanted. The first saw a swarm of players get blocked off and the resulting corner made the keeper block a headed effort.
Dynamic duo
Our boys continued where they had left off in the second half with Kike combining well with Carreño to secure that elusive first goal of the game. The pair came up with the goods soon after in exquisite fashion after a corner kick launched into the box was met by a Carreño overhead kick that was then nodded into the bottom corner by Kike. The players celebrated the sublime strike for what it was, an opportunity to finally impose themselves on the encounter. However, St Joseph’s did have a looping effort right after that hit the bar and almost went in. Were it not for the goalkeeping heroics of Muñoz, who somehow managed to take the ball from a St Joseph’s player’s feet, it could have been the equalizer, but it wasn’t to be. The Green Machine continued to have the lion’s share of the chances and slowly got a firmer grip on the game. Kike had two other opportunities throughout the rest of the game to put the fiery fixture to bed, but in the end his solo goal was enough.
To their credit last season’s third-placed team never gave up, pushing us hard until the end. But our boys held firm, giving the manager a big boost after a dismal run of results. Our fans will now be hoping the result will prove a turning point for this season and we can now go on a good run that will challenge early league leaders Lincoln.