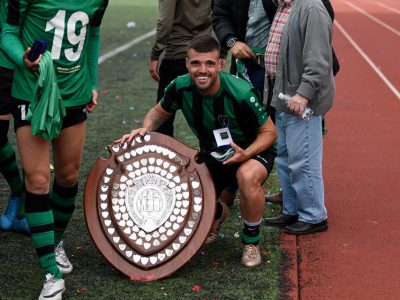 Liam Walker, who helped us win the league and cup treble back in 2016/17, is returning to Europa on a three-year contract.

The attacking midfielder, who is Gibraltar national side’s leading goalscorer and most ever capped player, will play in the Europa League Qualifiers. He is hoping to do “amazing things” throughout the coming season after a year at the oldest football club in the world, Nottingham County, in the English Football League Two, the fourth tier in the country. “I’m happy to be back at Europa FC,” said Liam Walker, after his return to training. “I can’t wait to get back into action for the team and hopefully go and do amazing things like we did in 2016/17 where we won the treble and made history.”

“That is the plan ahead – to win trophies and carry on making history for Europa. It is a club that is going in the right direction and for sure has a very big future. But right now, we have a massive three weeks of hard work ahead of the first match in the Europa League Qualifiers.”

Walker combines talent with experience having begun his football career at Algeciras CF after trials at Manchester United, Everton and Aston Villa. After spells with clubs in the area close to Gibraltar, he went on to play for Portsmouth and Bnei Yehuda in the Israeli Premier League.

He finally ended back in Gibraltar at our arch rivals Lincoln Red Imps where he stayed for two seasons before signing for Europa on 18 August 2016. After a successful season at our club where he managed 15 goals in 26 appearances, last season’s tragic Champions League loss to TNS led him to a trial at Notts County where he stayed for a whole season before deciding to return to Europa this week.

“I am absolutely buzzing to be back and I can’t wait to get out on the pitch and start helping the team,” he said. His manager in 2018/19, Juanjo Gallardo – who will be the same man he worked with during his previous stay at the club – could not contain his enthusiasm.

“Undoubtedly Liam is a very important player at national level for Gibraltar and for any club he is at,” said Gallardo. “It am very satisfied and proud to be able to count on his services this coming season, not only because he is a great footballer on the pitch but also a great personality in the dressing-room.

“It is a dressing room he knows to perfection as well, so he will take no time at all in settling in. This is why we will welcome him with open arms know he will help us grow to become an even better team.”