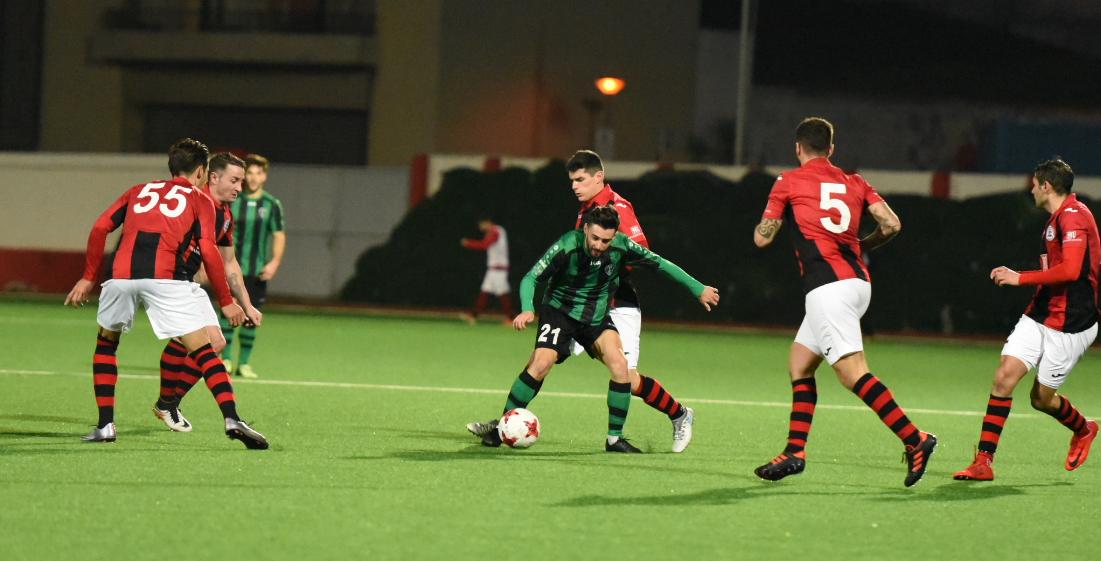 The match had already been dubbed ‘El Clasico’ in social media circles because of the intense rivalry between the two teams. It was in so many respects a clash of two titans, Europa, the League Champions and Rock Cup winners of the previous season, and the former rulers of the modern game, Lincoln Red Imps who are now top of the league. With one of the biggest crowds of the season so far, Lincoln pressed forward from the off, their direct long balls piercing into our back line. However, they created few real chances with their direct style and it was Europa that got the first real chance.

Ghanaian Mustapha Yahaha – whose skill and finesse really came to the fore during the whole game – took the ball past two Lincoln players, feeding it to the right wing and ran into the box. When he got the ball back however, he was unable to finish it off as his effort was not hit with enough power to beat the goalkeeper and was easily saved. His fellow countryman, Ibrahim Ayew, whose inspired running at the Lincoln back-line was sadly cut short by injury at the beginning of the second period, made life very difficult for last year’s runners-up. His solo run past two defenders could have ended up in a goal, but he couldn’t keep his shot down when there were better options in the box.

Europa then got their best chance of the game 24 minutes in. A floated pass was headed into the arms of the goalkeeper when it could have been so much more. In the other goal, a free-kick Lincoln managed to find a man alone in front of Javi Muñoz but his slice was a let-off for Champions. In the 33rd minute Ivan Moya was booked for diving even as he seemed to show the referee the bruise on his leg from a late challenge. Our midfield warrior tried to pick himself up off the floor to the mocking cries of Lincoln fans, but what happened next must have made up for it.

Europa’s intricate passing style, that was in full flow throughout the match, created the opening for the man known as Ñito to put us ahead. The referee this time waved away handball appeals from the Lincoln players, who seemed unable to halt the flow of the silky Europa attack. If only Europa had made it to the first half they might have had a chance to consolidate that lead but a prolonged period of pressure from the Lincoln side finally paid off. A defensive mistake in the 44th minute led to the ball being pulled back and the man was brought down, with the referee pointing straight to the spot. Joseph Chipolina put it away with ease and the teams went into the tunnel at one-all.

The second ball turned out to be a much more cagey affair than the open-ended first half. Lincoln were happy to settle for a point and only created a couple of half-chances. Europa had the lion’s share of the possession but the last ball was always missing. That could all have changed 15 minutes from the end as Lincoln started to tire and the Champions were suddenly all over their rivals. A shot towards goal was adjudged to have been blocked by Joseph Chipolina’s hand in the box, for which he was only given a yellow card. Unfortunately, makeshift striker in the absence of Carreño and Kike, Jorge Piña, had his shot saved by Manuel Soler and both clubs had to settle for the draw.